How Can I Improve My Posture? Dynamic Neuromuscular Stabilization and More 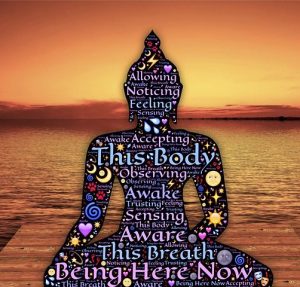 Ideal posture is our biological right

You want to have a better posture and hopefully it is not the aesthetics of good posture that is firing your engine to look into it. Let’s talk about DNS or Dynamic Neuromuscular Stabilization. Dynamic Neuromuscular Stabilization is based on the fact that we as humans are wired for certain muscle patterns that result in stability and the idea that the development of human motor function is genetically built-in and follows a predictable pattern. These patterns are made apparent by the study of Developmental Kinesiology. For example, during a child’s first year of life the development is compared against expected developmental milestones such as rolling over, creeping, crawling, sitting up, squatting, and walking.  These motor patterns are an innate process in that, in a healthy baby, these activities are automatic and occur as the brain and Central Nervous System (CNS) mature; they occur at expected ages. The more the CNS matures, the more these motor patterns are formed and strengthened which explains an infant’s ability to go from being able to crawl a few inches at first to quickly being able to crawl around an entire house in what seems like the blink of an eye.

I always use nature as my guide. The debate among healthcare professionals in their approach to resolving health issues is many times shaded by education. In my opinion, nature knows best and the pattern of natural development and creation is the most ideal way. With that said, why reinvent the wheels if we don’t have to. If newborns develop brain-body connection through movement and brain activity, if newborns are born with the best and most optimal breathing method (because oxygen is so important in the function of brain and body parts) and if they develop muscle function, coordination by the brain to play in concert with other muscles and joints to create movement, then THAT is the right pattern for corrective purposes. 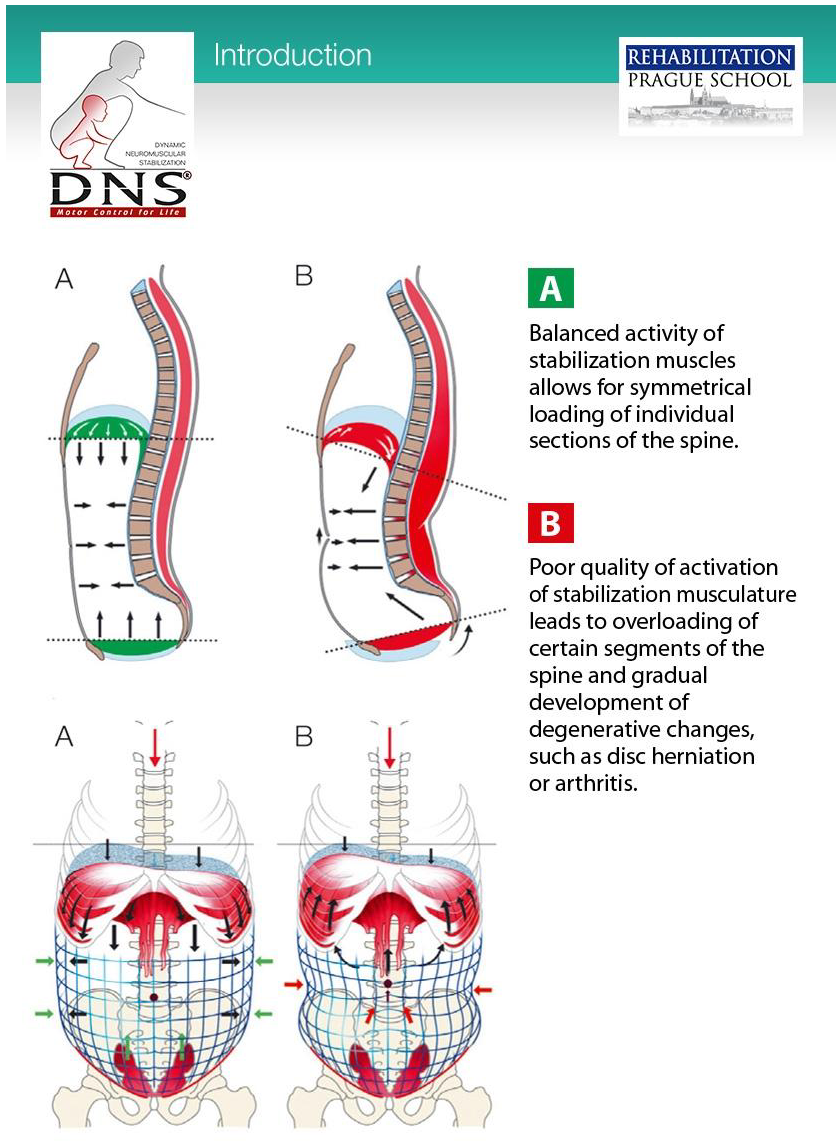 In coordinated muscle movement, such as walking down the hallway, there are a number of muscles working as synergists (companion to each other) and some working as agonists (opposite of each other). For example, if you were to flex your arms your biceps are the agonist, and the triceps are the antagonist. The muscles helping the biceps in flexing your arm are the synergist muscles.  The work of these synergists and agonists and the coordination among them is a vital aspect of spinal stability and movement in general.

Intra-Abdominal Pressure (IAP) is the pressure inside the abdominal cavity.  This pressure along with the activity of the Diaphragm, pelvic floor muscles (pelvic diaphragm), and the transverse abdominis (all of which help regulate IAP) play a huge role in spinal or core stability.  The diaphragm, pelvic floor muscles, and the transverse abdominis (which travels from side to side across the abdomen) are the muscles that makeup what is known as the deep core. Their actions are under the automatic, subconscious control of the brain and movement of the core is an important aspect of any purposeful bodily movement. In Dynamic Neuromuscular Stabilization, this deep core is the focus to all movements just as it is in babies. We do not need to reinvent the wheels!!

We have 3 diaphragms to be concerned with: The cervical, the abdominal and the pelvic diaphragms. They all are parallel to each other and they provide optimal breathing route to oxygenate the brain and body. When we breathe through the nose, it presses the cervical diaphragm down toward the feet, which pushes air through the lungs. The filled lungs press the abdominal diaphragm down, increase the inner abdominal pressure which then presses the pelvic diaphragm down. It then changes direction and the whole path is reversed, The in-synch movement of air through these diaphragms allow subtle movement of the internal organs which is so important in the health of these organs. Once again, HEALTH IS IN MOVEMENT! Just as a side note, when the abdominal diaphragm, the one that is right below the lungs moves, in breathing in and out, it moves slightly forward and backward as well as up and down. This also empties the Thoracic Duct which is the master ‘sewage’ for our lymphatic system. As you may know, the lymphatics is another way we detoxify ourselves so you can clearly see that proper breathing plays a huge role in the overall health. I

In early infant development, the diaphragms function only as respiratory muscles – pulling air and moving down into the abdominal cavity toward the pelvic diaphragm and pushing air out of the lungs ultimately.  When a baby develops enough (around 6 months of age) chest and abdominal breathing will coordinate, allowing the diaphragms to begin to fulfill their role respiration and postural muscle development. The last role is vital to spinal stability and is the basis for all complex body movements.  In fact, just as any impaired function of the diaphragm as a respiratory muscle would have a huge impact on breathing, insufficient functioning of the diaphragm as a postural muscle would have an enormous impact on our body’s way of maintaining our ability to move and joints to remain stable under a load of gravity known as the Integrated Spinal Stabilizing System (ISSS).

Compensation: a source of chronic pain

Proper functioning of our ISSS is crucial for good, fluid, pain-free movement patterns.  If our ISSS is not functioning properly, it increases the demand on other muscles or tissues to take over the workload for the muscles and tissues that are not performing as they should; this is known as compensation. Over time, that compensation can become the new “normal” movement pattern for the body. If this continues unaddressed this altered movement pattern can lead to faulty CNS function, poor performance, impaired movement, and chronic pain.

The seat of all motion: the CNS

Punjabi described the stabilizing system of the spine integration of 3 different systems.  These 3 systems include the Neural system, the CNS composed of the brain and spinal cord, the Active system, known as our body’s musculature, and the Passive system, which includes our bones and joints. Though many doctors, therapists, trainers, and other clinicians have primarily focused on the muscles and joints, countless repetition of squats or shoulder presses in proper form, many clinicians are now identifying the importance of addressing movement where it starts- at the brain.

Recognizing the CNS as the main driver of movement changes the attention from localized muscle dysfunction to identifying faulty co-activating muscle patterns that are activated with movement in order to stabilize a joint.  For example, when watching an athlete struggle to maintain proper form when performing a squat, we are tempted to look to identify which local muscles are weak and which are tight. However, a neural-based approach looks to the function of the ISSS at a brain level in an attempt to identify faulty movement patterns where they begin.

In today’s world we are constantly moving, trying to stay ahead, juggling 25 different things as we’re getting the kids fed, the laundry is done, and the perfect business proposal sent off to the boss all while looking as though we never broke a sweat.  Even breathing seems to become a chore or an unimportant task at times. We find ourselves getting into patterns of shallow chest-breathing which barely engages our diaphragms and throws off that whole core stability mentioned above. Then we spend hours in the gym- doing countless planks and sit-ups or signing up for cross-fit classes in our effort to help us “build that core.”

Breathing and Proprioception: What’s that?

Improper communication between your brain and the rest of your body can lead to faulty ISSS function and compensating movement patterns which place an uneven load on joints.  This uneven load accelerates degeneration and prevents the body’s ability to move efficiently. Over time, these changes will decrease performance and increase the risk of injury or the development of arthritis.

In re-establishing proper developmental motion patterns, the very first step is to restore proper respiratory pattern and IAP regulation.  Yes, that means that the very first step is to breathe. Recreating balanced activity between the diaphragm, and abdominal wall, and the pelvic floor muscles are so crucial.  There are several ways this can be evaluated including the seated diaphragm test during which I, for instance, observe the expansion and contraction of the rib cage during both normal and heavy breathing.  This can provide a great deal of insight on the level of coordination happening among the core stabilizers and provide awareness of proper breathing patterns that help facilitate proper muscle contraction and relaxation.

With movement dysfunction, we must look to the brain where the coordination of communication begins. The brain is the seat of body awareness; it controls important functions that help you control your body such as proprioception (which is your ability to know where your body is in space for example, this is how you know exactly where your hand is even when your eyes are closed) and stereognosis (which is you are ability to touch an object and identify it without looking at it).  For you to know where your arms and legs are and whether your grabbing a door handle or a writhing snake proper communication between your brain and the rest of your body is vital.

What is next is different in each health care provider’s office. In my office, my evaluation is very unique. It may include up to 79 different brain tests to assess the posture, spinal examination, and gait or walking assessment.

We start with the principles of Dynamic Neuromuscular Stabilization (DNS exercises) to turn the focus to learning proper core establishment and foundation to all movements. This is a slower process which focuses on simple motions aimed to rebuild stability which will eventually lead to ease and accuracy in performing quick, complex, specific exercises. Consistency and training will correct and reinforce the proper CNS motor patterns making permanent changes and decreasing one’s risk for future injury. Remember, we do not need to reinvent the wheels and nature and a natural routine is our best guide in life.

Remember, you are the Designer and the Director of your own life so design and direct it the way you wish to live it!